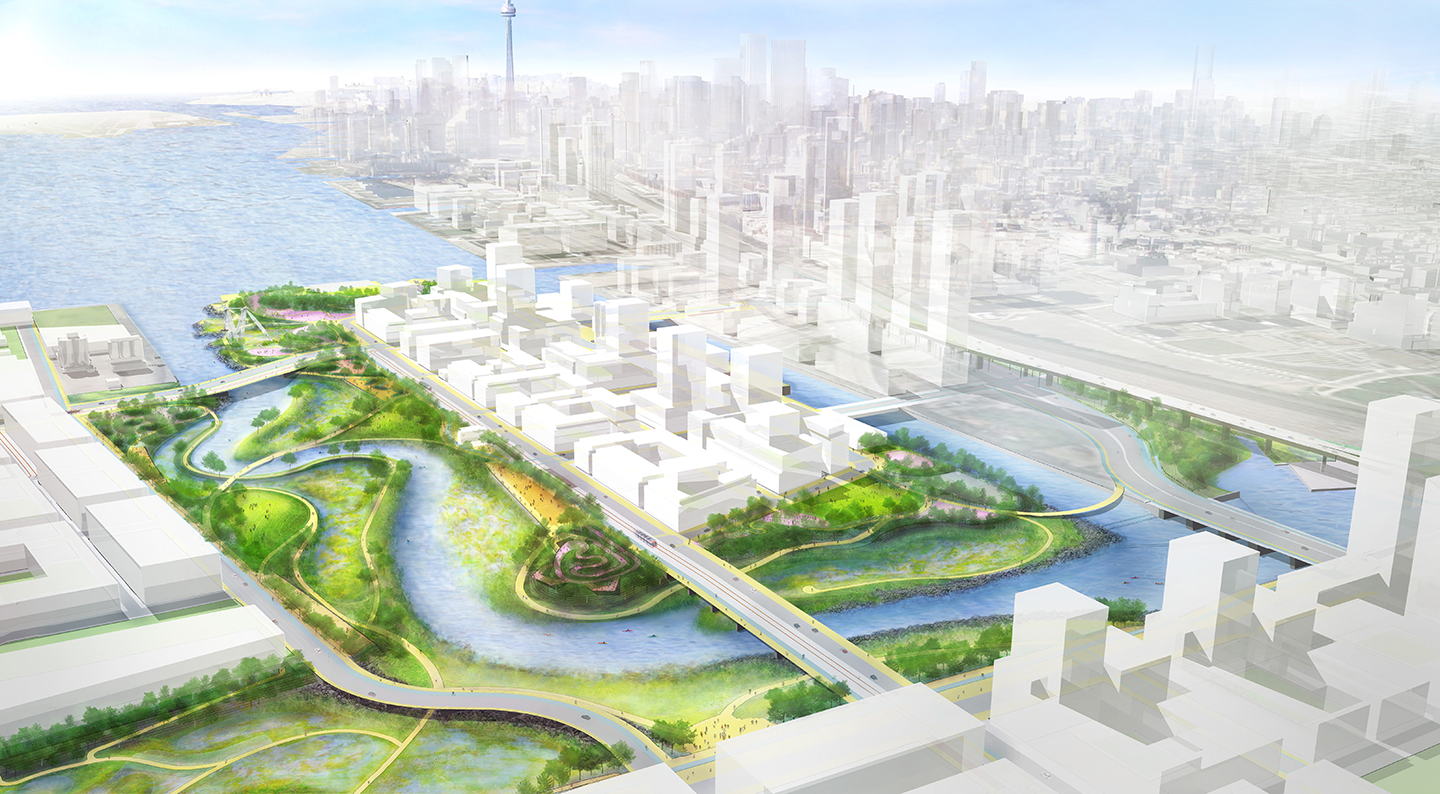 How cities are planning parks to help adapt to and mitigate the impacts of climate change.

This year’s Canadian City Parks Report contains a series of stories on climate resilience, natural restoration, and parks. You’ll also find stories on addressing climate resilience through an environmental justice lens, the power of partnership-based projects, the ways parks help with climate change mitigation and adaptation, and how climate change is impacting park planning and maintenance.

As climate change brings more droughts, floods, and other extreme weather, cities across Canada are embarking on a new phase of planning parks as networks of green infrastructure. This means engineering green spaces to enhance natural processes, such as designing parks as sponges to soak up excess rainwater and reduce flood risk.

These parks do triple duty by buffering the impacts of extreme weather, boosting biodiversity by increasing natural habitat, and providing places for people to gather and recreate. Canadians are supportive of these initiatives, with 92% of the nearly 3,500 Canadians we surveyed in April 2021 saying this type of climate-resilient infrastructure should be embedded into parks.

Master Plan for the Revitalization of Vacant Land in Pointe-Gatineau and Lac-Beauchamp Districts, Gatineau

Following two devastating floods in the Pointe-Gatineau and Lac-Beauchamp districts in 2017 and 2019, heavily impacted properties were ceded to the city and residents relocated. A master plan process to revitalize the vacant lots was initiated in 2020 and led by the Conseil Régional de l'Environnement et du Développement Durable de l'Outaouais with a working group, of which Park People was also a part.

Through this master plan, the city hoped, with community input, to redesign areas along the Ottawa river for better flood protection and community connection. Rather than proposing broad changes, the resulting plan lays out a toolbox approach at the lot level with a set of actions that can be implemented depending on a particular local context by either the city or community groups. This toolbox includes 25 typologies within five categories:

“One primary goal of the project was to elevate and inspire momentum so people take action,” said Manon Otto, from Mandaworks studio, the urban designer on the project. “We needed to harvest their energy and their interest for the project by providing a toolbox that is totally democratic.”

For more in depth analysis of this project, read Park People’s case study made possible by the Intact Centre for Climate Adaptation. 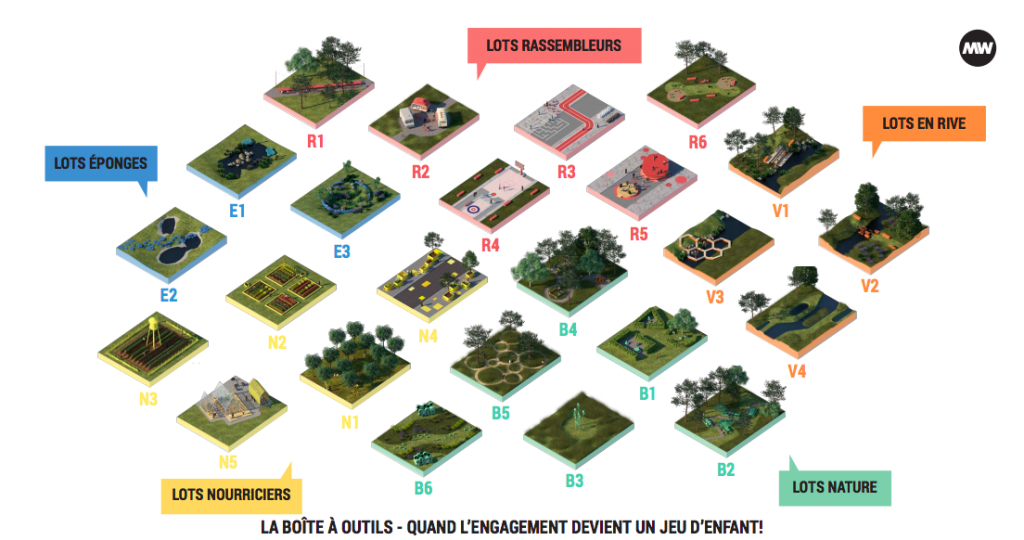 Down on the shores of Toronto’s Lake Ontario, a massive park and new neighbourhood is taking shape.

Led by Waterfront Toronto in coordination with the City of Toronto, the Don Mouth Naturalization and Port Lands Flood Protection project will create new parks and natural habitat. It will also provide flood protection by re-naturalizing the mouth of the Don River and carving out a new island neighbourhood.

The goal is not to block water or prevent it from rising and ebbing, but “to accept it and just be resilient to it in the same way that a natural system would be,” Baker said. For example, vegetation was carefully selected for species that “can bend and flex and allow water to move through.”

Designing a new river mouth means taking into account the interconnectedness of different ecosystems. Waterfront Toronto Vice President of Design Pina Mallozzi said that they had to pay special attention to plantings in the wetland areas. Since the riverfront wetlands will need to deal with sediment and other detritus that float down the river, the plants had to be carefully chosen to ensure they can survive under those conditions.

“It’s a heavily engineered project but at the end of the day it will feel like a very big green natural park space and that will be the success of the project,” Mallozzi said. 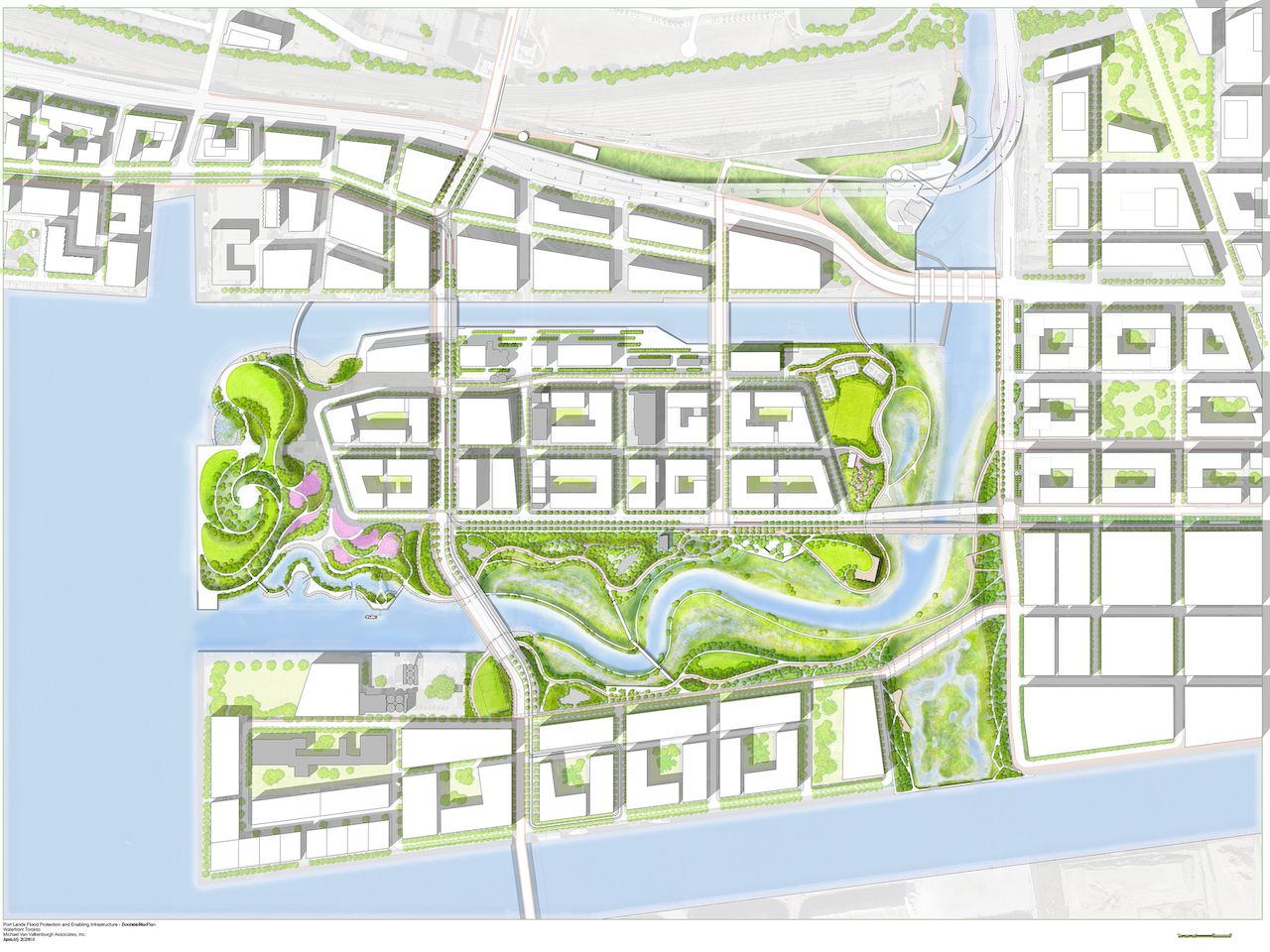 The Sustainable Neighbourhood Action Program is a “collaborative model for sustainable urban renewal and climate action that focuses on the neighbourhood scale,” Brampton city staff said. SNAP “focuses on empowering communities by engaging them on neighbourhood-based solutions and placemaking.”

The program works through partnerships, including the City of Brampton, Toronto Region Conservation Authority, Credit Valley Conservation, the Region of Peel, and community-based organizations and businesses. Through these partnerships, SNAP takes into account both community needs and city resilience priorities to create a customized action plan that identifies projects, such as retrofits to existing spaces.

One such project, Upper Nine Pond, was identified through the County Court SNAP process and opened in 2020. The goal was to meet both resilience and community public space needs by redesigning the stormwater pond to enhance water quality and create “an attractive public space that includes a trail, seating, and natural features,” staff said. 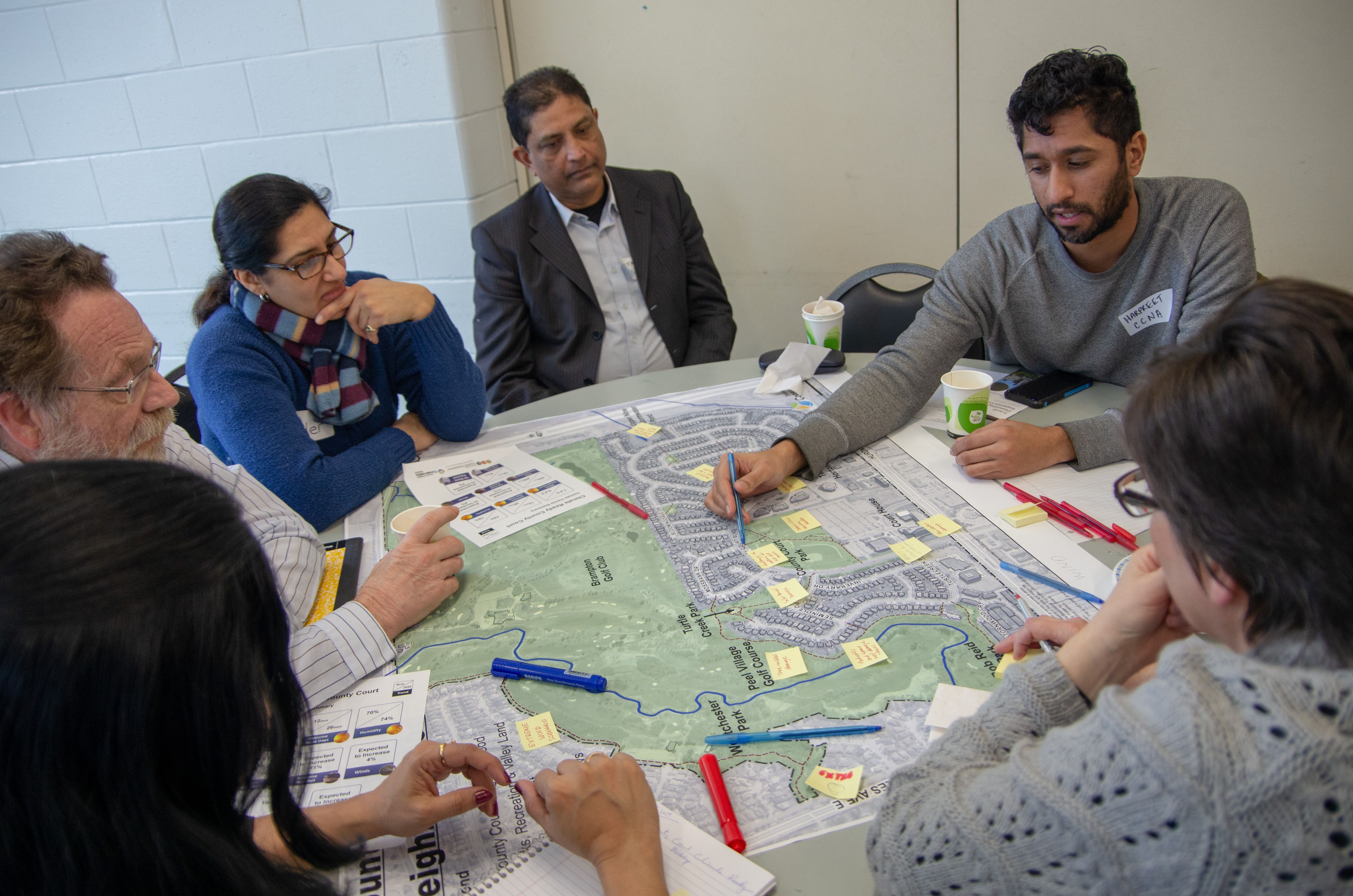 Completed in 2020, this 17-hectare park manages 100% of stormwater onsite, including the ability to hold more water than from a 200 year flood. The park’s green infrastructure elements, including 9,000 square metres of rain gardens, were paid for through a $750,000 grant from the Federation of Canadian Municipalities Climate Innovation Program funded by the Federal Government.

City staff noted the park also contains Ontario’s first double-use water system in the park’s splash pad, which will collect and treat water onsite and re-use it for irrigation—reducing the amount of water needed in the park. 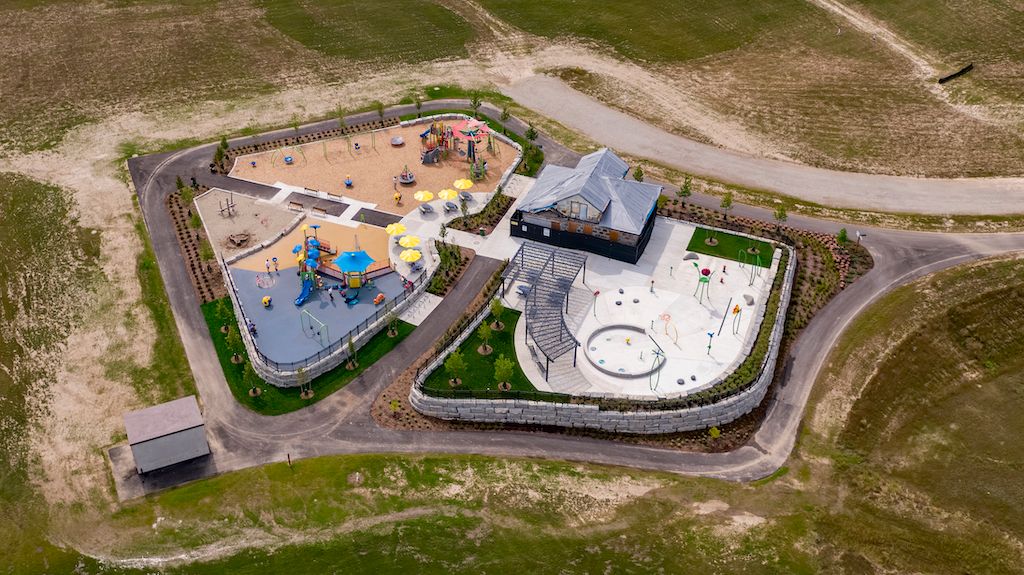 Opened in 2019, the 3.5-hectare Saigon Park includes a major stormwater management facility through a central pond designed to provide water control for nearby neighbourhoods from a 100 year storm event. The pond and its naturalized plantings also improves aquatic habitat and water quality.

The park also contains a one-kilometre walking loop with fitness stations and uses public art to highlight the environment through a piece entitled “A Year in Weather” by artist Ferruccio Sardella.

According to the city’s public art collection website, “this work is a celebration of the storm-water management project at Saigon Park and represents the balance between weather, natural systems, and built environment.” 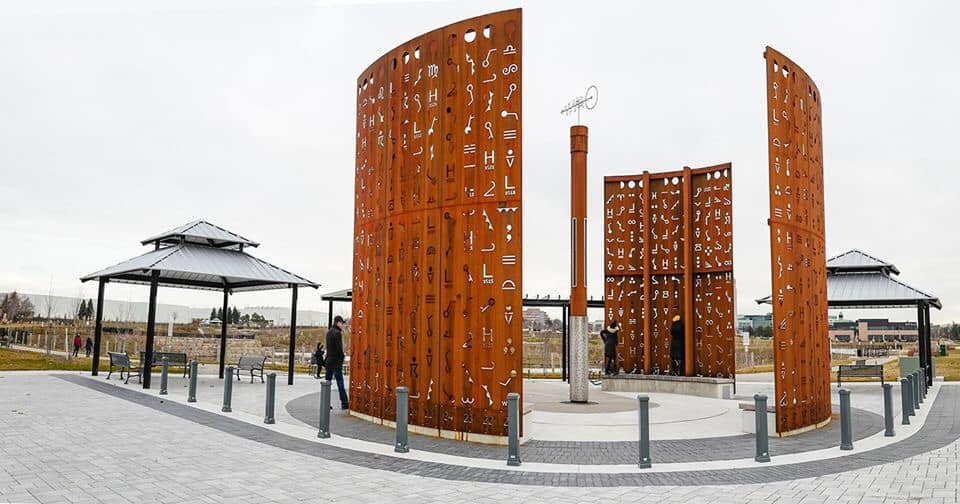 Winner of the 2021 Canadian Society of Landscape Architects Jury’s Award of Excellence for Large-Scale Public Landscapes, Calgary’s Dale Hodges Park transforms land that was once a gravel quarry along the Bow River into a 40-hectare park and stormwater treatment facility that addresses runoff from over 1,700 hectares of the surrounding area.

Dale Hodges Park traces “the journey of stormwater through a series of curated experiences, collaboratively designed with The City's Parks, Water Resources and Public Art departments, emphasizing the flow of water through the landscape,” the CSLA website states, calling it “a new type of high-performance public space.” 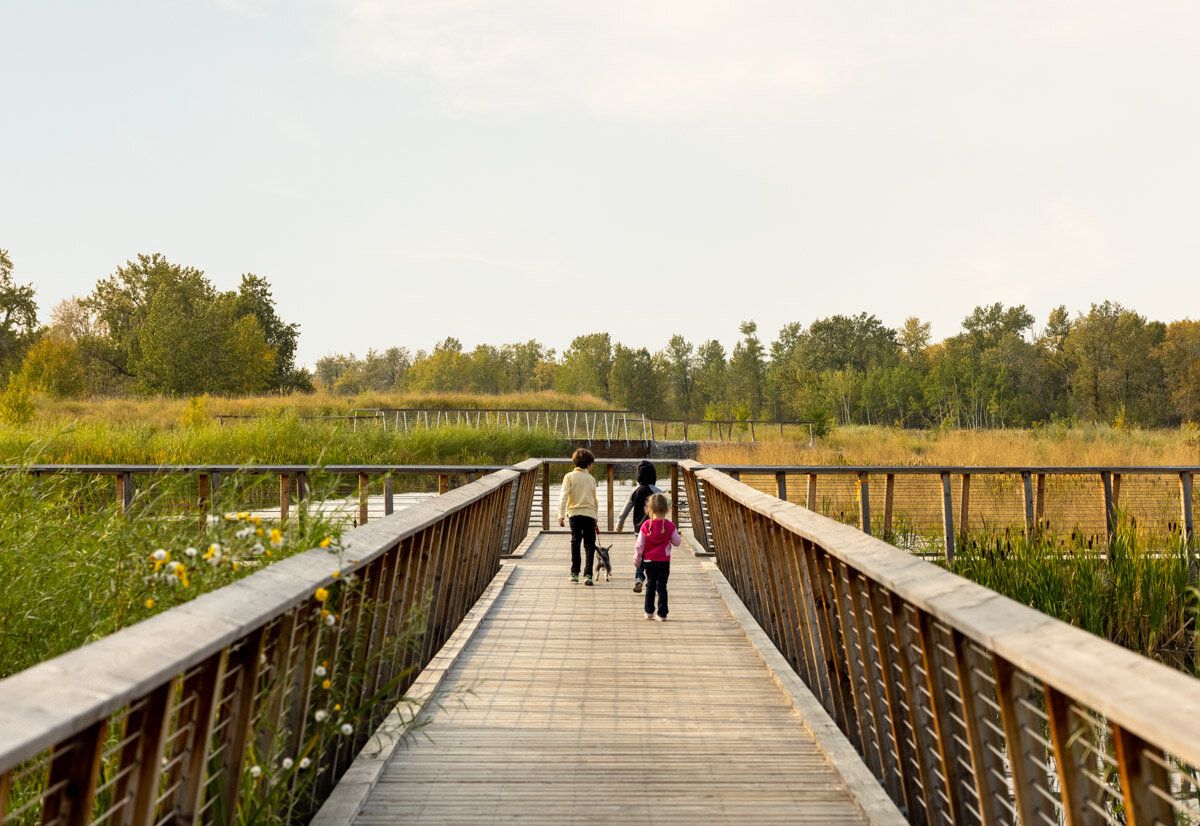 Montreal is transforming McGill Avenue in the heart of downtown from a paved street to a naturalized landscape through a design chosen through an open competition. The winning design best met the city’s objectives of expanding green space, reducing the urban heat island effect from paved surfaces, and increasing resilience and biodiversity through a rich and diverse plant selection.

The winning concept aims to reinvent the Avenue as a series of small, natural, and comfortable "living rooms,” linked by a long border bench and a furrow of water. The new space will offer users of the city centre a daily immersion in nature, in contrast with the built density of the surrounding downtown.

Increasing green space and tree canopy in a dense urban environment by redesigning a street to be more park-like will help the city adapt to climate change impacts, said Noémie Bélanger, planning advisor for the Sainte-Catherine and McGill College projects. But transforming a street into a more green environment is also challenging given the need to take into account a series of underground utilities that can limit the planting opportunities at the surface.

Successfully establishing a young forest in the middle of a city centre so that it becomes a functional support for biodiversity requires the involvement of experts capable of planning the growth of plant layers and their maintenance, which the city has also recognized as an opportunity to involve local community members and academic researchers.

According to Bélanger, although planning practices have evolved towards more ecological approaches and cities are increasingly integrating these criteria in their design requirements, there are still opportunities for cities to develop tools to monitor and evaluate climate change challenges within city parks. 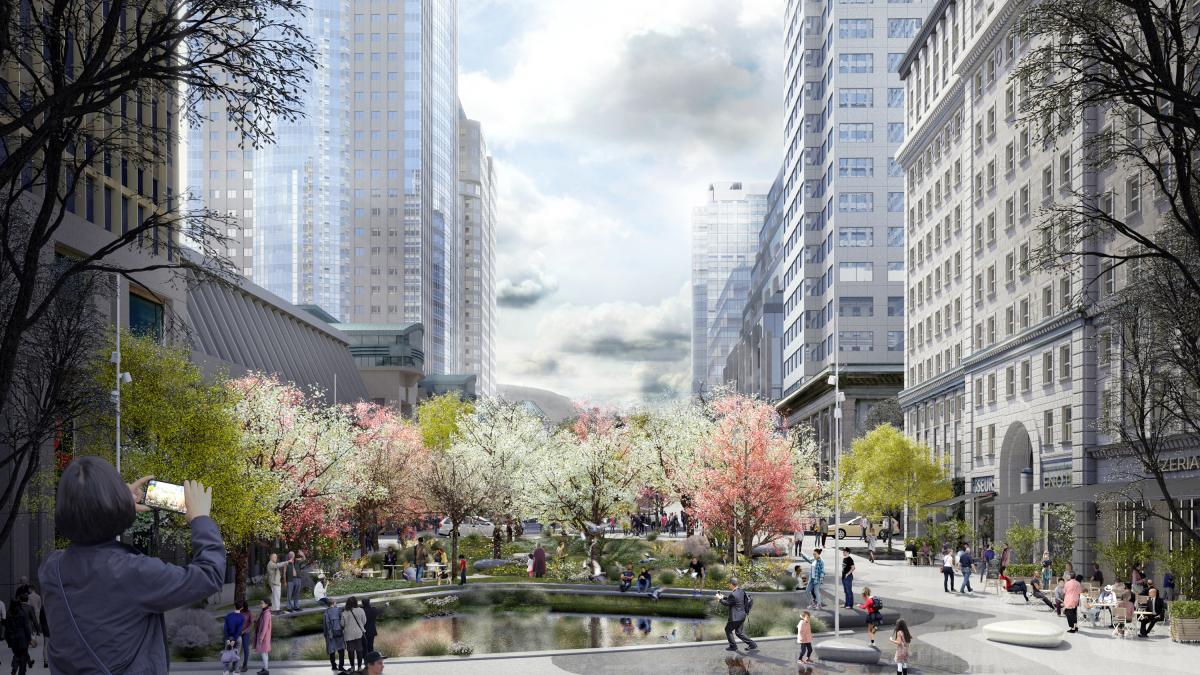 The St. George Rainway shows the potential of stream “daylighting,” whereby formerly buried streams are resurrected, but also the importance of community advocacy in raising new ideas. What began as a community vision more than a decade ago to restore a lost waterway in Vancouver’s Mt. Pleasant neighbourhood is now moving forward through a city public consultation process.

“St George Street was once home to te Statlew, also known as St George Creek,” the city’s project website states. “In the early 1900s, this historic creek was buried underground to make way for roads and houses. The St George Rainway aims to reimagine this historic waterway through implementing green rainwater infrastructure features that capture and clean rainwater from local streets and sidewalks.”

“The Rainway has potential to not only provide essential rainwater management services, but also create a unique blue-green corridor that provides enhanced public space, street improvements, and more greenery and biodiversity to the neighbourhood,” the city states.

The project follows other Vancouver stream daylighting projects such as through Tatlow and Volunteer Parks, which we covered in the 2020 Canadian City Parks Report. 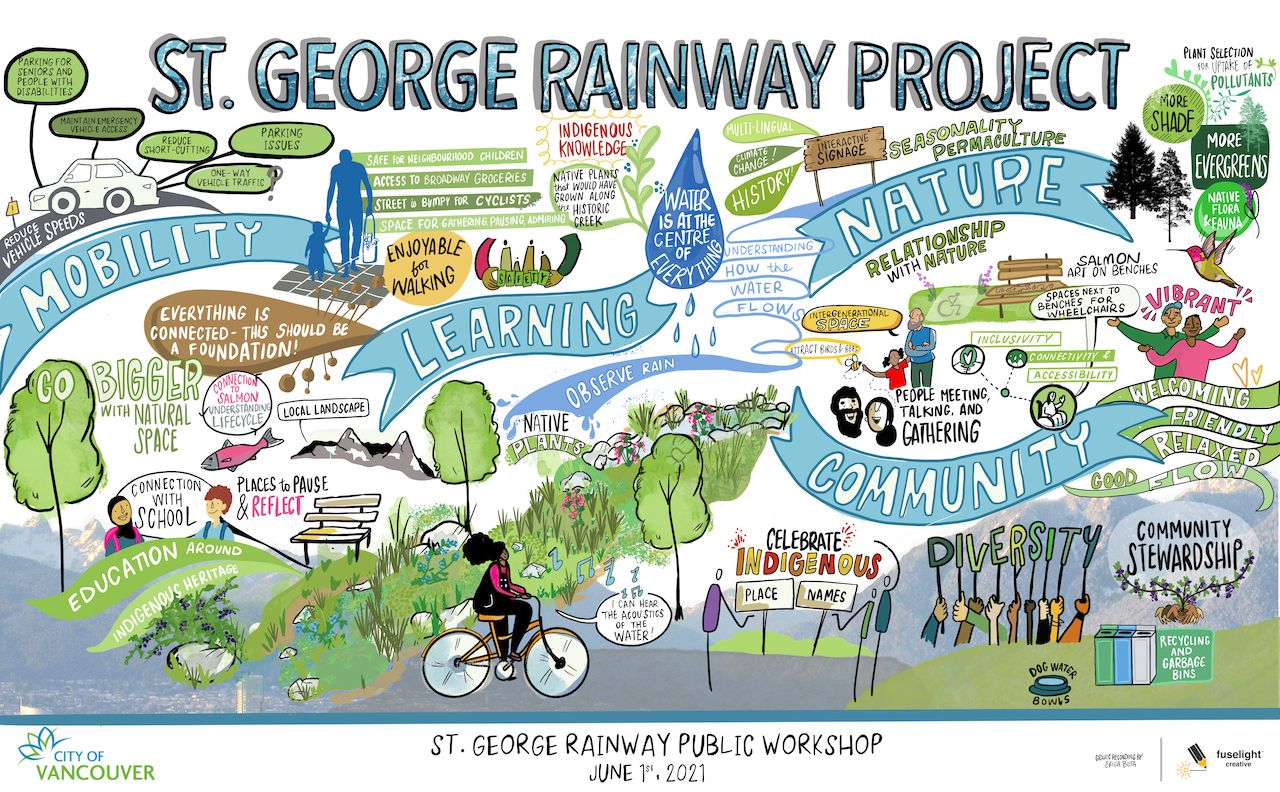 Sharing the Benefits of Green Space
Special Thanks
Park People thanks Intact Financial Corporation for its support of the Gatineau case study.