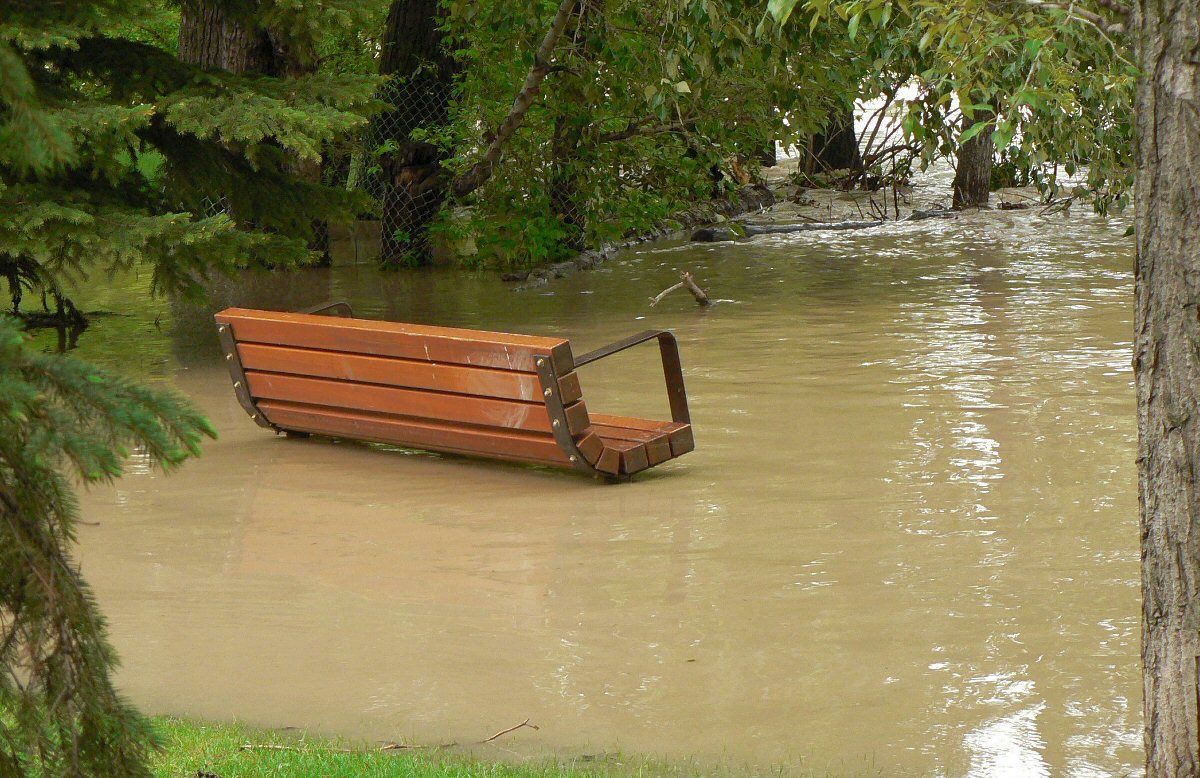 How climate change is impacting how we plan, design, and maintain parks.

Climate change is all encompassing. It impacts how we grow food, how we get around, and how we build our homes. Our city parks are no different.

As we outline elsewhere in this report, there are many ways parks help mitigate and adapt to climate change. For example, park vegetation can help pull carbon from the air, reduce temperatures during heat waves, and soak up excess rainfall to avoid floods during extreme weather events.

But climate change also places stress on our green spaces, increasing the chances they will be damaged during a storm and altering the growing climate of plants. Indeed, 84% of cities said that protecting against climate change and extreme weather damage was a challenge.

Ensuring parks can provide important climate resilience benefits means making changes to how we plan, design, and maintain green spaces so they adapt and thrive in a changing climate. These changes ripple across everything from how we plan park systems to the aesthetics of park landscapes to the equipment used to cut the grass.

From one-off to system-wide

Some of this planning work is in its early stages. For example, while almost all Canadian park system master plans reference climate change, many of the recommendations are for further work to create guidelines that can better integrate climate resiliency standards into park planning.

This doesn’t mean that cities aren’t building climate-resilient parks, but that they may be one-off projects—like a rain garden installed in a park to help reduce flood risk—rather than formalized changes to how all parks are designed and redeveloped.

That is beginning to change, however.

Consider Mississauga’s new Climate Change Action Plan, which calls for integrating climate change considerations into park development standards. The city’s Climate Change Supervisor Leya Barry said that the city was already doing this work on a park-by-park basis, but “some things that were championed by an individual [city staff person] may lose momentum and attention if that individual leaves or takes a different role.” Standardizing climate resilient planning in parks will help institutionalize practices and ensure continuity.

Holistic plans that formalize practices across an entire city can also help cement a new way of doing things and build partnerships between different city departments like parks, transportation, and water.

Vancouver’s Rain City Strategy, for example, coordinates green infrastructure improvements—like rain gardens, bioswales, and retention areas—across streets, parks, and developments to meet a goal of capturing 90% of rainfall. In reporting on why the strategy was so important, park staff noted that “without comprehensive policy, green infrastructure projects have mainly been staff-led pilot initiatives...rather than an integral part of city capital programs.”

Similarly, Kitchener approved a citywide policy that directs all private and public development to mitigate stormwater runoff by capturing the first 12.5 mm of rainfall where it falls, rather than allowing it to run into underground pipes. This attention to managing rainfall is shown in innovative practices at the recently completed RBJ Schlegel Park, which manages all rainfall onsite and reuses water from the splash pad for park irrigation.

Lastly, in Brampton, the recently approved Eco Park Strategy helps guide the development of a resilient, connected park system, grounded in values such as naturalization, ecological integrity, and recognizing social and cultural value. The city is developing an EcoPark toolkit that will provide guidelines for both city park development and community members, such as adopt-a-park groups, on how to implement the strategy’s goals in specific projects. The city is already putting the plan into practice, using an Eco Park lens to re-naturalize the concrete banks of the Jefferson, Jordan & Jayfield channel. 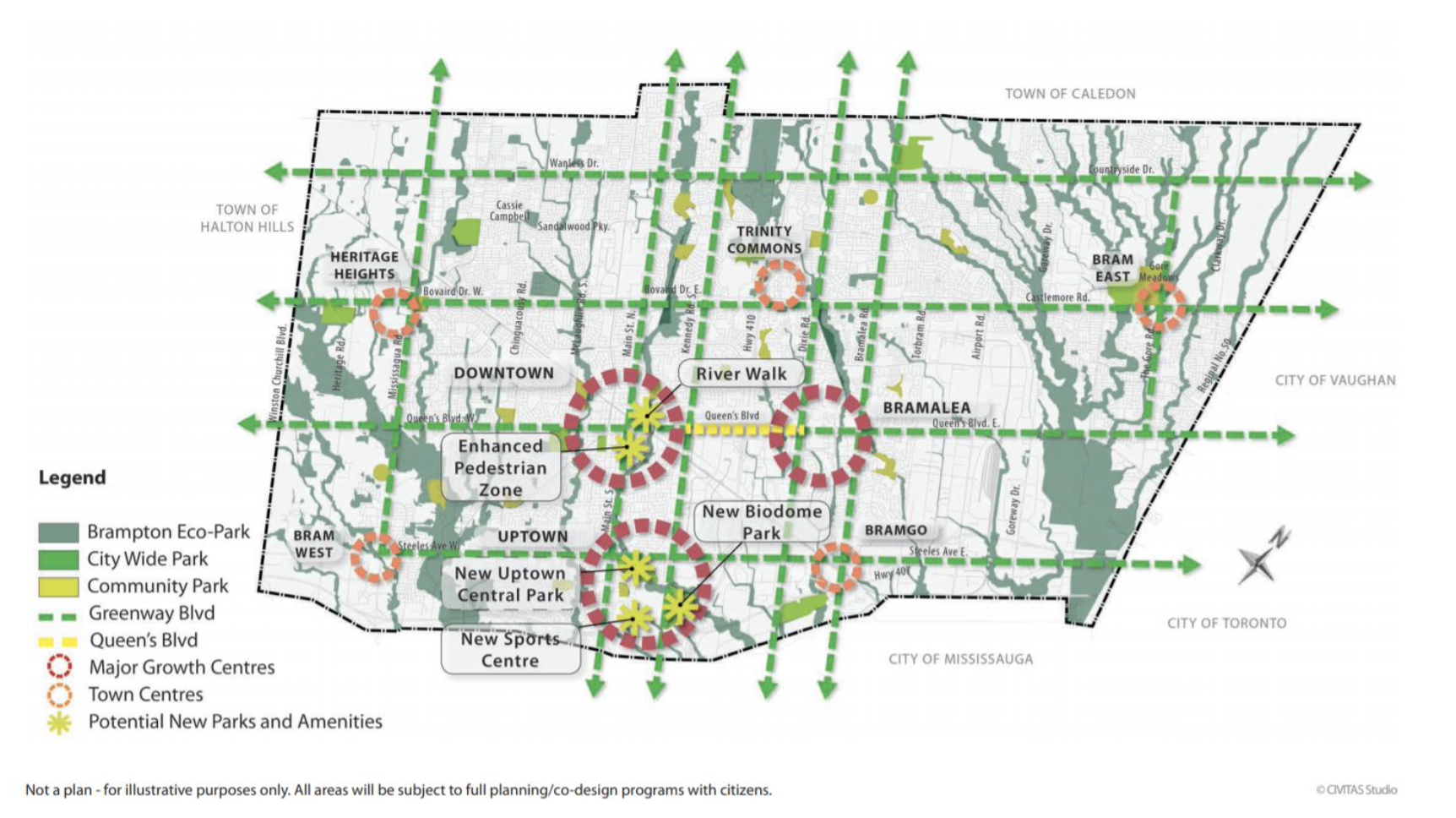 Shifting what grows and thrives

Depending on where you are and the time of year, climate change in Canada is bringing warmer, wetter, and drier conditions. This impacts the types of plants and trees best suited for parks, necessitating a shift to more climate-resilient species and opening the door in some cities for species that wouldn’t have grown there otherwise.

Edmonton’s climate adaptation plan, for example, notes that by 2050, the city’s growing season length could increase by 22 days, which will shift what plantings grow best. While Regina park staff indicated that a changing climate has created an opportunity to plant new tree species.

These shifts will alter the landscape of our parks in different ways. For example, displays of native wildflowers instead of annuals in park gardens. But it also means changes to one of the most ubiquitous landscapes found in parks: the lawn.

Manicured lawns aren’t going away—they’re key for sports and lounging around—but cities are moving towards naturalizing some of these spaces, shifting them to so-called “low mow meadows.”

Moving away from a grass monoculture can boost biodiversity and increase the climate benefits of parks. For example, studies have shown a diversity of plants helps keep spaces cooler than a grass lawn. And as Edmonton city staff noted, “increased naturalization results in less need for mowing,” which reduces emissions from trimming equipment.

To increase this practice, Edmonton city staff said they have adjusted the city’s landscape standards to focus on naturalization opportunities “in unprogrammed, low use spaces or spaces where there is environmental benefit to naturalize” Similarly, in Brampton, the city’s 2019 Landscape Development Guidelines promote climate-resilient plantings and include planting density requirements for parks. 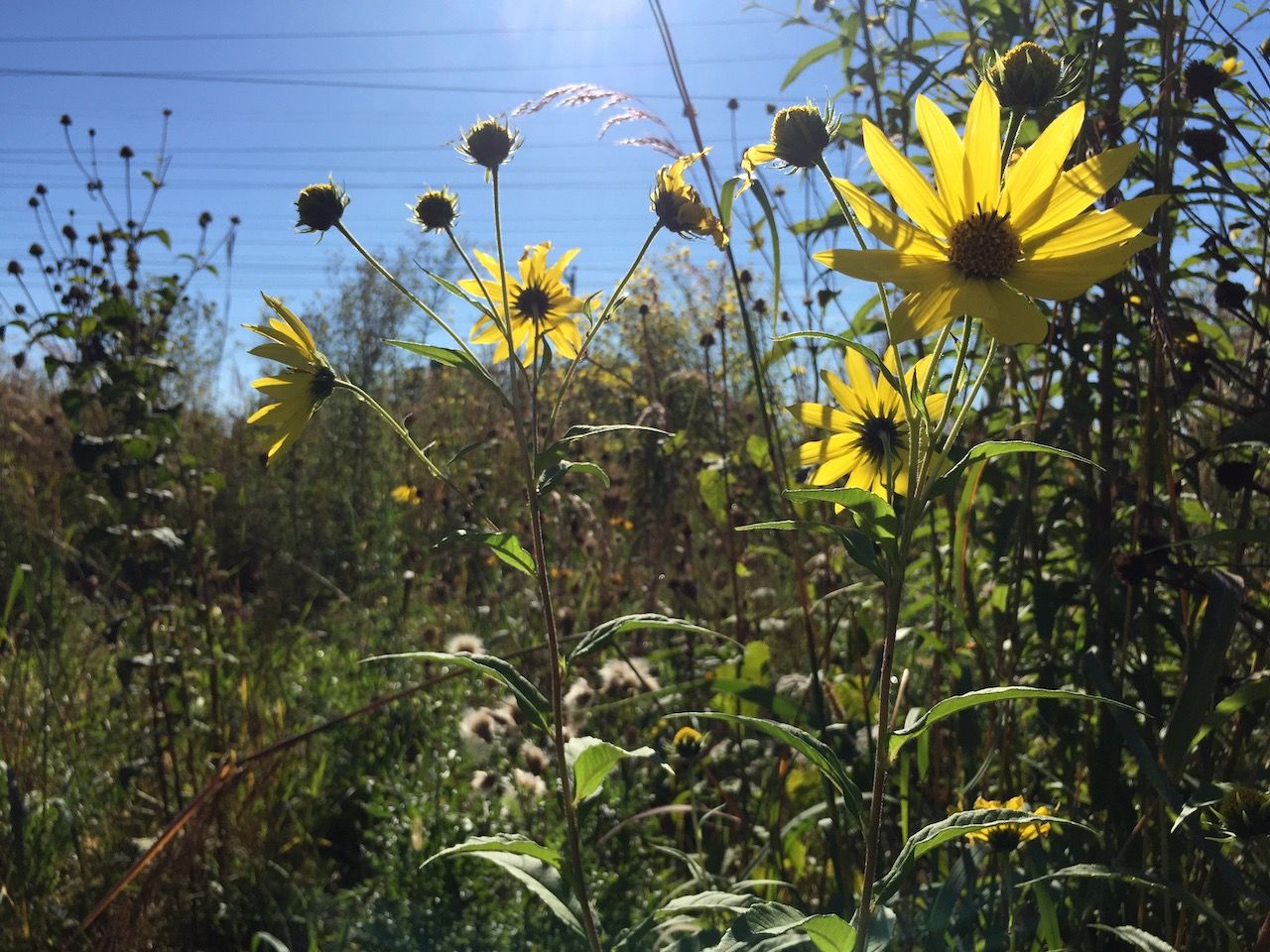 “We’ve created an expectation that there will be tight mown grass and formalized flower gardens,” Vancouver Park Board Senior Planner Chad Townsend said. The Park Board, however, is transitioning more spaces to low-mow meadows. A recently approved pilot will see 37 hectares in 18 city parks converted to more naturally managed landscapes.

“It is difficult to manage change for people who are used to a different aesthetic,” Townsend said. “For some, it’s unkempt and messy in comparison, but that’s what naturally managed areas look like.”

Simple signs may help. Townsend said the Park Board will create pathways through some of the meadows, placing signage that welcomes people to use them. Similarly, in Toronto’s Meadoway—a project that is naturalizing a 16km hydro corridor—the Toronto Region Conservation Authority installed signs to educate people about the new meadows and why they may look different than other park landscapes. 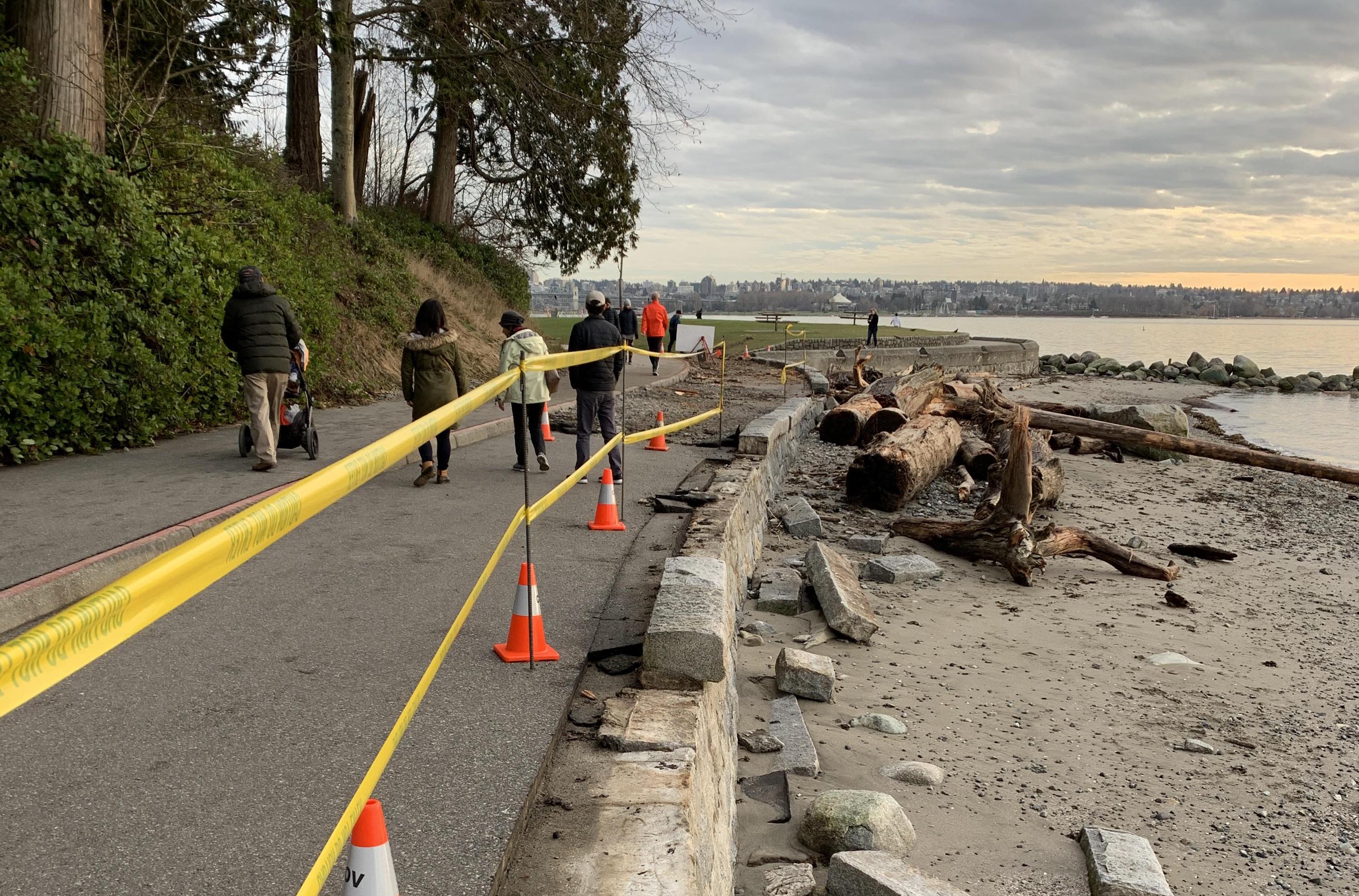 It’s a challenge to think long-term as opposed to “putting a patch on what has been damaged,” he said. He argued, however, that it’s important to strike a balance between forward-thinking actions to create more climate-resilient parks and appreciating public expectations for well-loved park spaces.

The question becomes whether the city fortifies itself against sea level rise or accepts that some parks will flood at times and design them to accommodate, Townsend said.

One way Vancouver is tackling this is by inviting the public into a conversation about the impacts of sea level rise through a program called Sea2City that brings attention to how waterfront parks may be impacted. The program includes elements like installing signs calling attention to future high water marks in waterfront parks, and a “Conversations in Canoes” video series with a range of experts. 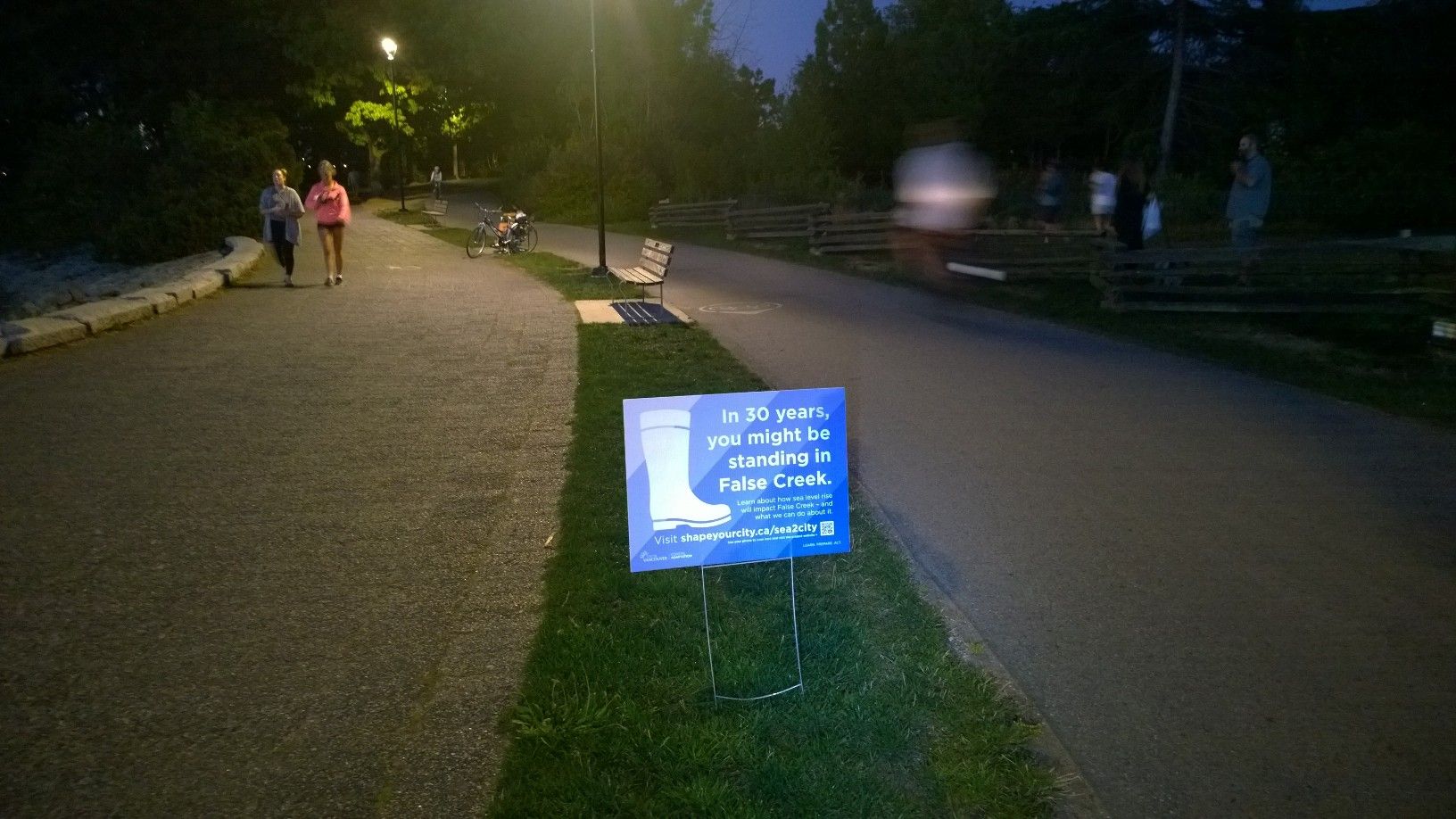 Recognizing the importance of local acts

Despite the major challenge climate change poses, it’s not all about city-led actions. As we pointed out in last year’s Canadian City Parks Report, local actions in small spaces can have far-reaching impacts.

As Nature Canada’s Policy Manager Michael Polanyi argued, neighbourhood-based projects can be “proof of concept,” using success stories to pave the way for larger projects and policy change across the city.

“Initiatives to plant trees in parks or start community gardens or distribute rain barrels in a neighbourhood or try and restore a small wetland—I think those are important in terms of engaging people, in terms of raising awareness, in terms of showing support and energy behind local initiatives which get politicians excited and on board,” he said.

Neighbourhood-level projects also highlight changes needed to reduce barriers that exist in a city in promoting more resilient practices. “When residents try to do something at the local level, you [notice] barriers—whether it’s lack of funding or a ridiculous permit system you have to go through or a by-law that’s in the way.” Polanyi said.

Polanyi also pointed out that “cities are often the modelers of wider change.” For example, local advocates were critical to the enactment of pesticide bans, which started at the municipal level and then moved up to provincial laws.

“Often working at the neighbourhood level, getting something happening at the city level, is the way that change happens,” he said.