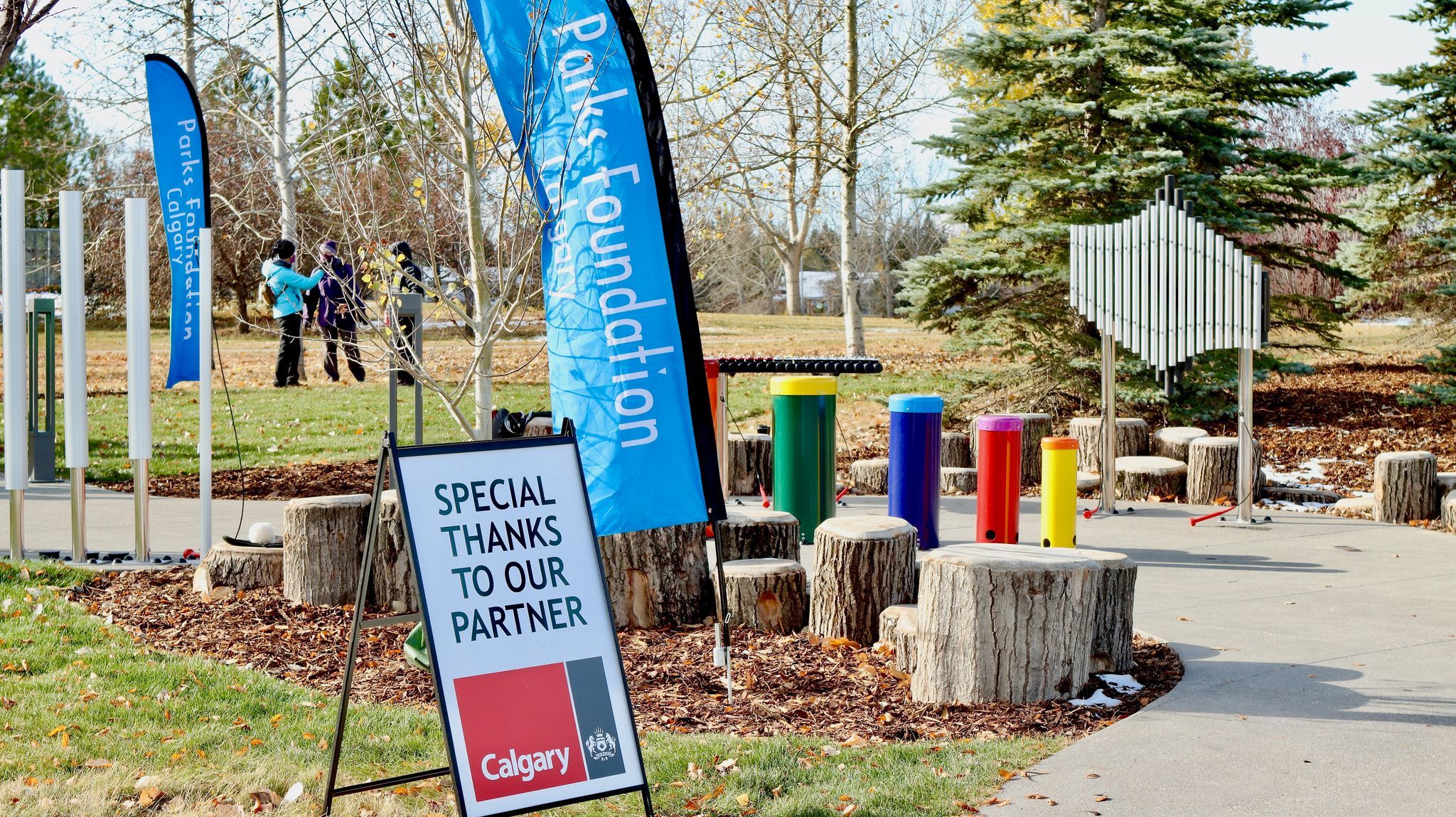 In Canada, philanthropy has historically been focused on public institutions like universities, hospitals, and the arts, but less so on parks. However, recent years have seen major new public space donations in Canada. With rising appreciation for parks during the COVID-19 pandemic, philanthropic interest in parks could grow, bringing both opportunities and challenges.

“Citizens have always gotten involved to create the city that they want,” she said. “People deeply care about parks and public spaces—we’ve seen that more and more through the pandemic. And when people care for something they want to contribute to that—whether it’s their time, talent, or financial contributions.”

This deep sense of connection is also why Toronto’s Parks Forestry and Recreation Division’s Doug Bennet believes people give to parks. “Philanthropy is an opportunity for people to give to causes that are important to them,” he said. “People love our parks and a lot of people feel compelled to give back.”

The primacy of public funding

Park philanthropy is still quite nascent in Canada. While there have been some larger donations, such as $25 million for Toronto’s Meadoway, the majority of funding is for smaller-scale projects, such as playgrounds, and community programming. This can take the form of individual major gifts, foundations, corporate donations, and community-based fundraising.

Bennet said that while donations to parks can make real impacts—and he has seen interest in park philanthropy grow during his eight years at the city—it’s important to keep the scale of these investments in mind compared to the overall publicly funded city parks budget.

“It's not an insignificant amount, but it's also not an enormous amount,” Bennet said. In the 2020 Canadian City Parks Report, for example, Toronto reported $8 million from private sources out of a more than $100 million capital budget, showcasing the dominance of public funding.

In Calgary, the city’s Leverage Partners Program provides matching funding for philanthropic and community-led park projects through an $8 million budget over 2019 - 2022. Thunder Bay has a similar program where the city will share half the cost with a community for projects over $100,000, while Ottawa splits its cost-sharing program into both minor and major capital projects. 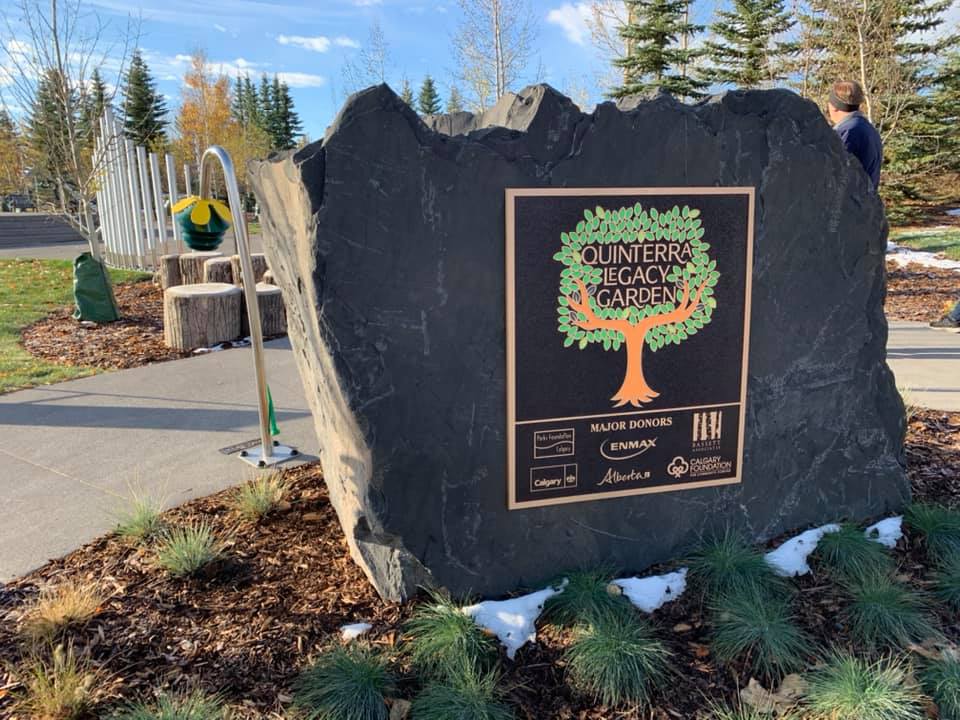 Learning from the American experience

While Canada is nowhere near the scale of park philanthropy seen in the United States, there are lessons we can take from the American experience where drastically reduced parks department budgets have coincided with an explosion of privately funded and operated parks.

Park budgets in Canada, while strained, have not seen the drastic cuts that many American cities have faced, which have effectively shifted a portion of responsibility of care and funding for city parks from the public to the private sector.

This shift has resulted in some truly eye-watering donations, including $100 million for New York’s Central Park and $465 million for the creation and operation of Tulsa's Gathering Place.

These increasingly large donations have caused some to raise concerns. Critics argue that big money donations distort park planning towards donor visions, crowd out public dollars, and result in the overfunding of showcase parks in affluent, often whiter, neighbourhoods at the expense of lower income, racialized communities.

The experience of New York’s High Line is another example. Following criticism that the heavily privately-funded linear park catered to mostly white visitors and resulted in gentrifying the neighbourhood around it, the non-profit behind the park launched the High Line Network. This new organization—of which the philanthropic-supported Bentway and Meadoway in Canada are members—publishes resources to help other parks follow a more inclusive and equitable development path.

Successful philanthropy responds to community needs and doesn't arrive with a fully baked plan that provides little avenue for community members to shape outcomes. For cities, it means ensuring transparent and equitable processes for evaluating projects. While some donors may be frustrated at a slower pace for approvals, these processes are critical in providing public oversight.

In Calgary, Parks Capital Development Manager Nico Bernard said that the city has done a lot of work defining the relationship with the Parks Foundation Calgary, including expectations of how projects align.

The city uses a “stage gate” process that involves projects passing through several evaluations. This ensures projects fit within the city’s strategic vision and meet actual user needs. Projects are evaluated several times from proposal to construction. “There’s a rigor there to make sure projects get vetted,” Bernard said.

Part of vetting is “thinking about the future of the space too, not just what happens when it’s first built,” Sheila Taylor said. It’s important to have conversations up front about who will maintain a space long-term before any fundraising agreements are in place.

The Foundation has also helped the city with its own priority park projects, such as the recently completed Rotary-Mattamy Greenway. With its $50 million budget funded by both private and public dollars, the 138km greenway connects 55 communities around the city and was a part of the city’s strategic vision.

In Toronto, Bennet said any donation over $50,000 must go to city council for a vote, which dictates a level of due diligence. “You’re going to want to make sure that you’re putting forward a project that aligns with city interest,” he said.

Additionally, Bennet said that the city directs corporate giving to the city’s Neighbourhood Improvement Areas, which are defined by a set of equity-focused criteria, and other areas of the city that may not have access to the kind of philanthropic interest certain neighbourhoods receive.

Assessing philanthropic opportunities in parks through an equity lens is important as recent reviews of Canadian giving have uncovered some startling divides.

Rudayna Bahubeshi, a policy and programs specialist with nearly five years of experience working in the Canadian charitable sector, said it’s necessary to evaluate park funding through a racial-equity lens given the mental and physical health benefits we know come from access to high quality green spaces.

While it’s important to review which groups and neighbourhoods have gotten funding in the past, Bahubeshi said that it’s critical for organizations to think upfront in program design about what they can do if they’re not reaching Black and Indigenous-led groups.

For example, if a funder is hoping to reach a certain population, they should be clear about those commitments in the grant itself, she said. If people don’t see people like themselves supported in the past, then “it’s not obvious to them what’s a priority for the organization.”

Reforming how grants are reviewed is also key—a topic Bahubeshi explored in a 2021 article for The Philanthropist on anti-Blackness in the Canadian sector.

She stressed that care needs to be taken when assessing groups based on “capacity” because there’s a tendency to pass over groups who have less experience, ultimately resulting in the same groups being funded time and again. Rather than penalizing groups with less experience writing grants, it should be viewed as an opportunity to support these groups to grow, Bahubeshi said.

This advice supports what urbanist and anti-oppression consultant Lena Phillips wrote in a 2020 article on creating safe public spaces where she argued that current funding models privilege certain groups, containing access barriers such as requirements for charitable status or incorporation.

Some granting organizations have since taken steps to address these gaps. Both the Toronto Foundation and Vancouver Foundation have launched grants that specifically target Black and Indigenous-led organizations, offering phone consultations and reducing some of the barriers to access around charitable status.

And, while it is a publicly-funded grant, the Federal Government’s 2021 Healthy Communities Initiative, delivered by Community Foundations Canada, contained equity guidance for applicants designed by Canadian placemaker Jay Pitter that is helpful for organizations, cities, and foundations when designing programs. 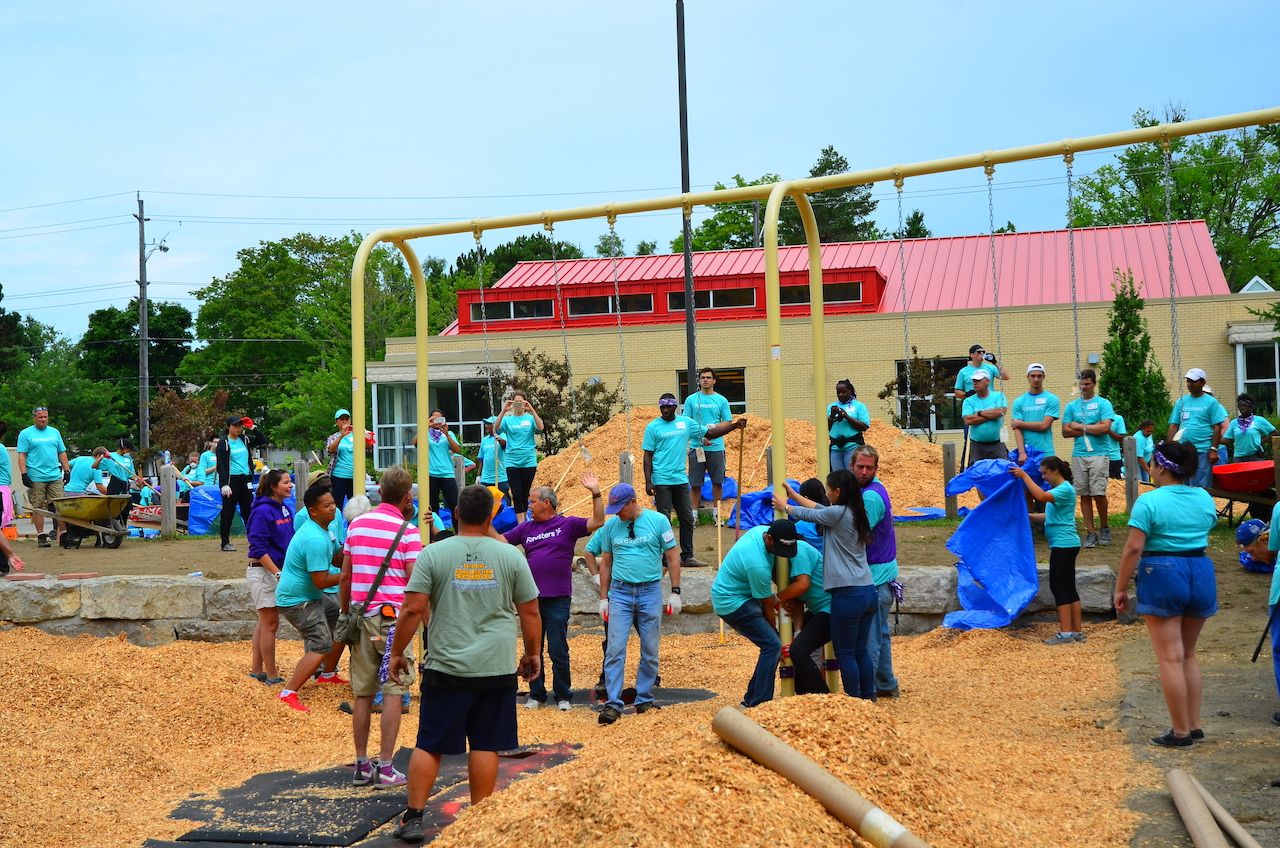 Beyond dollars and cents

While much of the focus on park philanthropy is about money, another important aspect—even more so than the dollars, some experts said—is the community capacity and stewardship-building element.

Park People Managing Director Erika Nikolai said it’s the time and energy people donate through organizing community programming that is so important. These smaller activations help build community connections, but also the capacity of these groups to put on larger activities and advocate for improvements.

She also pointed out that the pandemic has highlighted the importance of community programming in supporting more socially connected and healthier communities. Rather than focusing philanthropic dollars solely on capital projects, she said supporting these types of activities can be beneficial, while also requiring less money.

Philanthropic projects can also help bring people together. While solely city-funded park projects include community engagement elements, the quality of that engagement can be different when community members are more directly involved in raising funds, conceiving of a project themselves, or both.

Sheila Taylor argued philanthropy is about building a constituency of support for parks and a sense of shared responsibility and purpose. “I really believe that philanthropy isn’t just giving money, it’s about a commitment of your time and talents to a cause,” she said.

The Foundation focuses on providing tools to communities rather than taking on projects themselves. This includes grants to support conceptual design work and help managing the financial aspects of projects.

“We built a music garden last year and that was a real labour of love that saw many, many Calgarians donate personally,” Taylor said of the Quinterra Legacy Garden, a park built in memory of five youth who were murdered in 2014. “It was probably hundreds and hundreds of donors to this park to create this music garden and it was such a transformational experience.”

Toronto’s Doug Bennet pointed to the experience of philanthropic-supported playground builds. Engaging residents in constructing playgrounds together is a way to build relationships, Bennet said. “Partnership work can be about building that trust and that’s critical for government.”

Another way to tap into similar stewardship and relationship-building impacts, however, may be through participatory budgeting exercises. This publicly-funded process allows community members to propose and vote on a slate of projects to fund in their own community.

Canadian cities such as Kitchener, Montreal, Longueuil, and Toronto have piloted this process to varying degrees, with Montreal launching a $10 million budget focused on social and ecological resilience. These cities touted higher rates of participation than traditional park engagement. But they also raised concerns about the potential to foster a competitive atmosphere, which highlights how an equitable, transparent decision-making process is key—whether privately or publicly-funded. 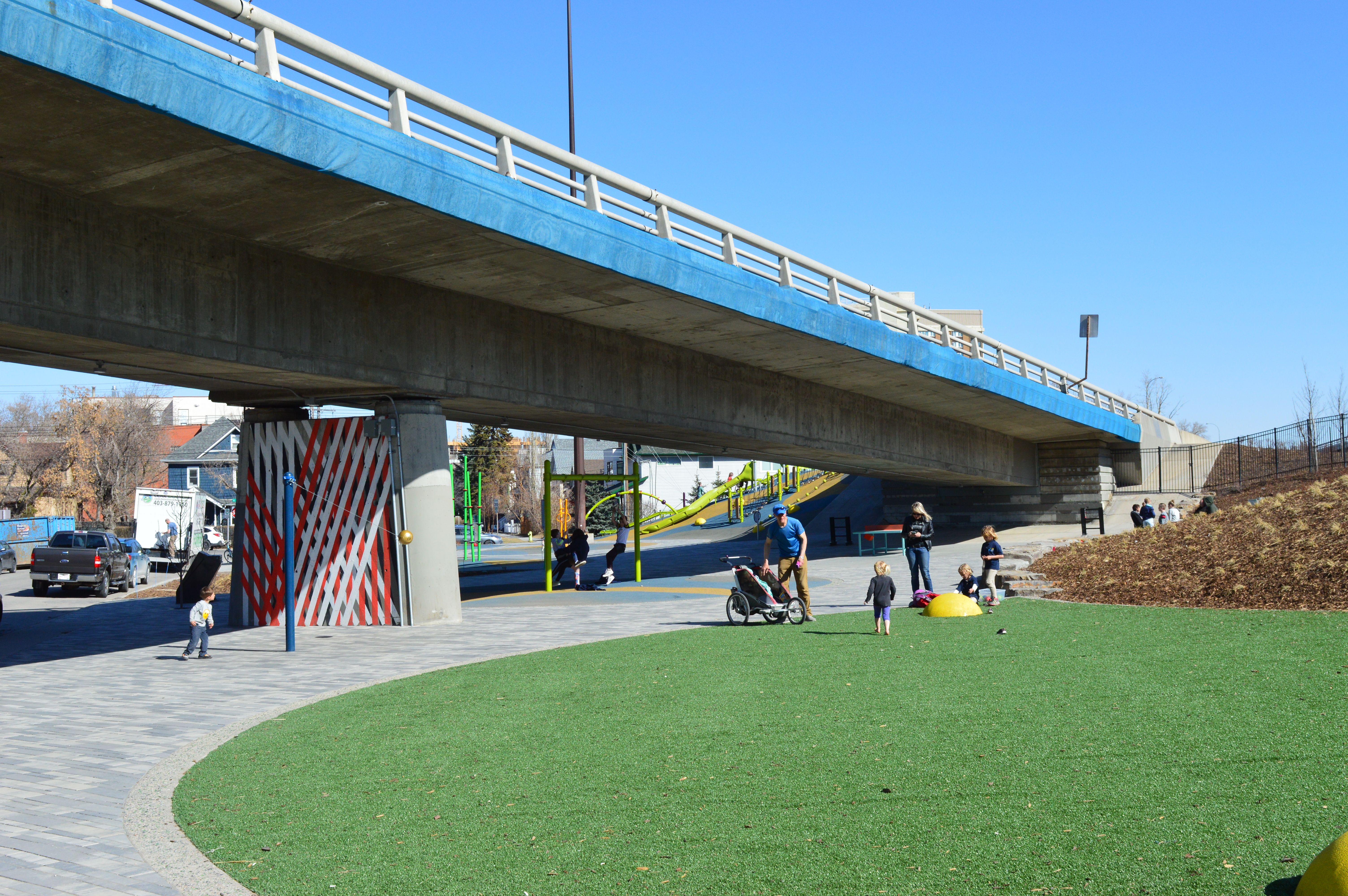 Finally, philanthropic and community-driven projects can help bring fresh ideas and a creative mindset to public spaces. A community can sometimes see connections across different types of public spaces they use in their daily lives—such as parks, hydro corridors, and streets—that a city parks department may not.

As Calgary’s Manager of Partnerships Marisol Narvaez said, philanthropy “does cause us to rethink how we approach public spaces.”

Just look at Calgary’s recently constructed Flyover Park. This unique park was the result of a community vision to reimagine public space underneath a roadway overpass.

Community members worked with middle school students to envision what was possible, eventually bringing on landscape architecture students from the University of Calgary to help flesh out the design. It was ultimately funded by a collection of private donations and funding from both the provincial government and the city.

Now it has become a much beloved spot in the community, but, as Sheila Taylor put it, “it started with children who had an idea to create a park there.”

Working Together in Nature